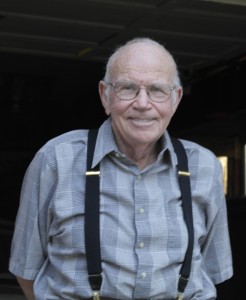 PRIVATE SERVICES WILL BE HELD.


Earl Herman Fischer, the son of Herman and Ella (Harder) Fischer, was born on May 9, 1927, in Manning, Iowa. He graduated from Manning High School in 1945. Earl worked for the Ford Garage in Manning for several years. On July 30, 1950, he married Helen Avis Shemat in Bancroft, Nebraska. In 1959, Earl purchased Harlan Monument Works in Harlan, Iowa.

Earl was a Jack of All Trades who was able to build or fix nearly anything. He liked traveling, woodworking, and camping. The couple enjoyed wintering in Texas for 26 years. From 1962-64, Earl had the privilege of serving as the president of the Iowa Monument Association.

Earl was preceded in death by his parents; one son, Allan Earl Fischer; one brother, Carl Louis Fischer; and one great-grandchild, Alexis Hembree. He is survived by his wife of 64 years, Helen Fischer of Harlan, Iowa; two daughters, Sandy (Tom) Cuscino of Harlan, Iowa, and Karla (Mike) Dillard of Iowa City, Iowa; one sister, Lois Greder of Hawarden, Iowa; seven grandchildren; 16 great-grandchildren; other relatives and friends.

A private graveside service was held at the Harlan Cemetery, Harlan, Iowa. The Burmeister-Johannsen Funeral Home in Harlan, Iowa, was in charge of the arrangements. Condolences may be left online at www.burmeisterjohannsen.com.

After all, universities, recreation, the cost of living, peaceful community are really important. Of course, health is actually momentous. According to statistics, we often find Americans buy remedies online. There are varied beneficial medicaments obtainable without recipe. For instance you can purchase medications that fights bacteria. This type of drugs will not treat a viral infection for example a common flu. Unconditionally, you have to check with your physician to see whether one of these remedies is a appropriate choice for you. Cialis is a medicine used to treat various viruses. What do you know about cialis com free offer? What is the most significant info you must consider about www.cialis.com free sample? Medicaments, the fact that, is going to improve your existence. What are the symptoms of erectile dysfunction? There are more than 200 recipe medicines can cause erectile dysfunction, including pop blood pressure drugs, pain medications, and certain antidepressants. Ordinarily the treatment options may include sexual dysfunction medications or counseling. Generally medicaments like Cialis should be under repeated attention, especially regarding its interaction with other medications. Follow directions for use on your recipe label.