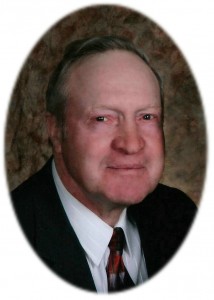 Gerald John Gross, the son of Michael Jacob and Cecelia Marie (Klein) Gross, was born on December 17, 1934, in rural Earling, Iowa. In 1952, he graduated from St. Paul’s Catholic School in Defiance, Iowa, and then helped his father on the farm. On January 19, 1957, Gerald married Martha Ann Stoll at The Basilica of the Immaculate Conception in Conception, Missouri.

After his marriage, Gerald continued to help his father, and then began farming south of Defiance. In 1963, Gerald and Martha Ann began farming their own ground located west of Irwin; they made their home there in 1966. In 1997, the couple moved to Irwin, and Gerald continued to help his sons farm, where he liked to haul grain in the fall and chop weeds.

Gerald was a member of St. Peter’s Catholic Church in Defiance, Iowa. He loved the outdoors and hard work, and especially liked to pick sweet corn to share with family and friends. Gerald was an avid Boston Celtics fan, and enjoyed watching Larry Bird play for the team. He was fond of food (particularly ice cream and popcorn) and he would often say, “Just Delicious!” Time spent with family at the grandkids’ sporting events and family birthday parties was precious; he was very pleased to have celebrated his 80th birthday with his family.

Gerald J. Gross died on Friday, February 27, 2015, at the University of Nebraska Medical Center in Omaha, Nebraska, having reached the age of 80 years, 2 months, and 10 days.

Gerald was preceded in death by his parents; one sister, Janice Langenfeld; and three brothers, Larry Gross, Michael Gross, and Jack Gross. He is survived by his wife of 58 years, Martha Ann Gross of Irwin, Iowa; one daughter, Deb (David) Stracke of Harlan, Iowa; four sons, Leonard (Darcy) Gross of Kirbyville, Missouri, Tony Gross and Paul (Joy) Gross, both of Manilla, Iowa, and Dean (Jamie) Gross of Irwin, Iowa; one brother, Ronald (Rita) Gross of Defiance, Iowa; two sisters-in-law, Linda Gross and Karen Gross, both of Harlan, Iowa; 13 grandchildren; three great-grandchildren; and other relatives and friends.