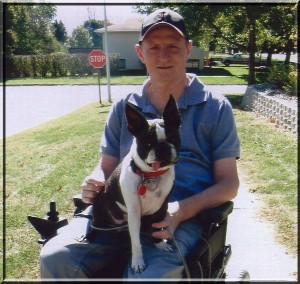 Steven “Steve” Randall Kesterson, son of Floyd Henry and Mary Constance (Dietz) Kesterson, was born on May 18, 1955, in Denison, Iowa. He attended Charter Oak-Ute (Iowa) schools, and graduated in 1973. Steve attended Southwest State University in Marshall, Minnesota, and received his Bachelor’s Degree. He later received his Masters in Computer Science from the Illinois Institute of Technology. Steve began working for Lucent Technologies in Naperville, Illinois. He was employed by Lucent for 23 years until his retirement. A few years later he moved to Harlan, Iowa.

As a young man in his early teens, Steve enjoyed hunting, fishing, trapping, and motorcycles. In September 1971, he suffered a spinal cord injury, but he chose to rise above his condition and be as independent as possible. He always liked football, especially the Chicago Bears, the Iowa Hawkeyes, and other Big 10 teams. A big-hearted person, Steve cherished his dogs. He also possessed a good sense of humor and a sharp analytical mind.

Steve R. Kesterson died on Tuesday, November 25, 2014, at Myrtue Medical Center in Harlan, Iowa, having reached the age of 59 years, 6 months, and 7 days.