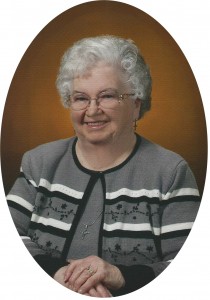 Elaine Ann Andersen, daughter of Adolph and Louise (Kay) Schnack, was born on March 7, 1922, in rural Walnut, Iowa. She attended Fairview #1, #6, and Center #8 country schools. Elaine’s family moved to Harlan, Iowa, where she attended Harlan High School for two years. On January 31, 1940, Elaine married Marvin Edward Andersen at Immanuel Lutheran Church in Harlan. The couple farmed in Shelby County for many years before moving to Kimballton, Iowa, in 1979. Elaine became a resident of the Salem Lutheran Home in Elk Horn, Iowa, in 2012.

Elaine was a member of the Bethlehem Lutheran Church in Jacksonville, Iowa, where she was active in the Ladies’ Circle. She had enjoyed working several part time jobs in Kimballton. Elaine was the treasurer of the Progressive Danes in Kimballton and served on the Corley Community Club Board for many years. She was also a Polk Township Get-Together Club member. Elaine liked participating in a number of activities, including playing cards, fishing, crocheting, baking, polka dancing, and sewing; spending time with family and attending family gatherings were special times for her.