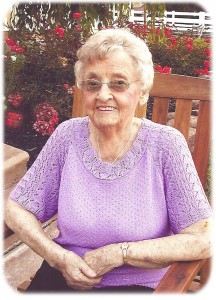 Dorothy Ann Peterson, daughter of Chris and Edna (Willadsen) Nelson, was born on March 28, 1920, in Harlan, Iowa. She attended school in rural Shelby County, graduating from the eighth grade. Her first job was as a babysitter and housecleaner at the age of 14. Dorothy enjoyed gymnastics and playing softball in the Poplar (Iowa) area. It was these activities that she and her future husband shared as young teenagers.

Dorothy married Wesley Virgil Peterson on December 24, 1936, at the Baptist Church Parsonage in Atlantic, Iowa. They first farmed in the Poplar area before moving to the Peterson family farm in 1942. This farm later became a Century Farm in 1990. In 1959, they moved to Elk Horn, Iowa, where Dorothy worked at the Elk Horn Produce as an egg candler and bookkeeper. She also sold Avon. Wesley and Dorothy continued to farm while in Elk Horn. They moved back to the farm in 1972. They moved to Harlan, Iowa, in 1984, and into their present home in 1993. Following Wesley’s death on May 15, 2001, Dorothy remained in their home until very recently, when she became a resident of the Avoca Nursing and Rehab Center in Avoca, Iowa.

Wesley and Dorothy loved going to auctions, often with special cousins, Ronnie and Adrienne Petersen, where they added to their many antiques and collectables. Wesley collected toy tractors and souvenir donkeys. Dorothy had several collections including Mickey Mouse items, die-cast airplanes, and Flora Gold Depression glass. Dorothy loved to cook and bake. Her family especially enjoyed her fried chicken, homemade bread, cinnamon rolls, and apple pies. Her hobbies included crocheting hangers, potholders, and afghans, and embroidering pillow cases, dish towels, and quilts. She shared many of her quilts with her children and grandchildren. She enjoyed tending her many flowers. Most of all, Dorothy loved her home.

Dorothy was a member of the First Baptist Church in Harlan. Dorothy A. Peterson died on Saturday, September 20, 2014, at Myrtue Medical Center in Harlan, Iowa, at the age of 94 years, 5 months, and 23 days.