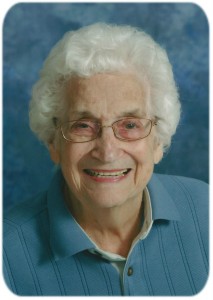 Patricia Petersen was born to Edward and Edna Letner Gibbons on April 23, 1923, in Milwaukee, Wisconsin. She was baptized in St. Robert’s Church in Milwaukee. Following her father’s death in 1923, the family moved to her mother’s hometown of Avoca, Iowa.

Pat graduated from Avoca High School in 1940 and from the University of Wisconsin, Milwaukee, in 1945. She married Robert Callahan on September 15, 1945, at St. Mary’s Church in Phoenix, Arizona. Pat and Bob taught in Arizona, and then the family moved to Avoca, Iowa. Pat taught in Carson and Avoca, and in 1963 the family moved to Harlan where Pat taught English for 24 years. Pat and Bob had two daughters, Mary Armour and Elizabeth (Dennis) Johnson. Bob died in 1976, and Pat married Russell W. Petersen on July 28, 1978, at St. Michael’s Church in Harlan.

Following their retirement, Russ and Pat traveled extensively in the United States and Canada. They made four trips to Europe and spent a month touring China.

Pat was a member of St. Michael’s Catholic Church in Harlan. She was a charter member of the Beta Iota Chapter of Delta Kappa Gamma, and NEA Lifetime member. She served on the Library board, on the auxiliary board of Elm Crest Retirement Community, and the Myrtue Hospital auxiliary board. She was a long time volunteer of the Lifeline Program, Myrtue Hospital, and Elm Crest. Pat’s favorite pastimes were reading, playing bridge, traveling, volunteer work and enjoying her grandchildren. She also had a great sense of humor.

Patricia Petersen died on Wednesday, September 17, 2014, at the Elm Crest Retirement Community in Harlan, Iowa, at the age of 91 years, 4 months, and 25 days.

Mass of Christian Burial was held on Monday, September 22, 2014, at St. Michael’s Catholic Church in Harlan, Iowa, with Father John Frost celebrating. John Rosman served as the musician. Casket bearers were Lud Buman, Ross Nelson, David Johnson, Kate Johnson, Steve Obrecht, and Russ Detjens. Burial was in the Graceland Cemetery, Avoca, Iowa. Memorials may be made to Elm Crest Retirement Community in Harlan. The Burmeister-Johannsen Funeral Home in Harlan, Iowa, was in charge of the arrangements. Condolences may be left online at www.burmeisterjohannsen.com.