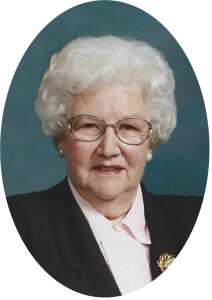 Opal Maxine Bertsch, daughter of Cary Alden and Violet May (Landon) Blaine, was born on December 20, 1920, in Harlan, Iowa. She attended Harlan schools and graduated from Harlan High School in 1939. On October 29, 1942, Opal married Robert “Bob” Frederick Bertsch in Vancouver, Washington. Following Bob’s World War II military service and discharge, the couple moved to Harlan. In 1959, Opal began working at Noble Photography where she was active in managing the office; she retired from this position in January 1989.

Opal was a member of Immanuel Lutheran Church in Harlan, Iowa, where she had taught Sunday School and was involved with the Immanuel Lutheran Church Women’s activities. Opal and Bob were both active volunteers with the Shelby County Historical Society. She enjoyed family gatherings, where her good cooking and baking were appreciated. Opal, whose favorite color was purple, was honored to be named the 1994 Harlan Mother of the Year. She also liked camping, traveling, and card playing.

Opal M. Bertsch died on Thursday, May 29, 2014, at the Elm Crest Retirement Community in Harlan, Iowa, having reached the age of 93 years, 5 months, and 9 days.

The funeral service was held on Monday, June 2, 2014, at Immanuel Lutheran Church in Harlan, Iowa, with Pastor Janet Miller officiating. Marge Ahrenholtz served as the organist, and Sherry Lytle was the soloist. Casket bearers were Brian Bertsch, Keith Svare, Michael Bertsch, Michael Wahl, Matthew Bertsch, Bradley Bertsch, and Thomas Noble. Burial was in the Harlan Cemetery in Harlan, Iowa. Memorials may be made to Immanuel Lutheran Church, Myrtue Medical Center, and Elm Crest Retirement Community, all located in Harlan, Iowa. The Burmeister-Johannsen Funeral Home in Harlan, Iowa, was in charge of the arrangements. Condolences may be left online at www.burmeisterjohannsen.com.