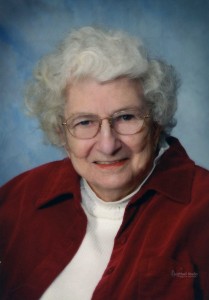 NO VISITATION WAS HELD

PRIVATE SERVICES WERE HELD
Burial was in the Graceland Cemetery, Avoca, IA

Ruby Marie Vollbaum, the daughter of Malling and Marie (Christensen) Frederickson, was born on January 30, 1922, on a farm near Avoca, Iowa. She attended country school until her family moved to a farm near Walnut, Iowa. Ruby graduated from Walnut High School in May 1940. She spent four years teaching in country schools near Corley and Walnut. She worked at Goodrich Dairy in Omaha, Nebraska, as well as the Ford Garage and Bank in Walnut. Ruby attended Dana College and was a member of the Dana Choir. She enjoyed traveling with the choir to perform for audiences.

On September 18, 1948, Ruby was united in marriage to Ervin Vollbaum at the English Lutheran Church in Avoca. They became parents to Carl and Joy. They settled on a farm south of Shelby, Iowa, and Ruby became involved in all aspects of the farm, which for a several years included a dairy operation. In the summer she was busy canning produce from her garden and making several kinds of jelly. Ruby had a talent to make a prize-winning loaf of bread; when family and friends stopped by to visit, they always looked forward to having a slice of her homemade bread.

Ruby enjoyed working at the Harlan Newspapers as a bookkeeper from 1971 to 1997. She made many friends there, and kept in touch with them after her retirement. She was a regular attendee of the annual Shelby County Rural Teachers Reunions where stories and memories were shared.

Ruby was known for her wit and sense of humor about life, especially when she would receive a comment about the red Camaro she was driving. She was a fan of dirt track racing and NASCAR, and a highlight for her was attending the Daytona 500 race in 1979. When Ruby was forced out of the fast lane into retirement, she continued to enjoy life on the farm from her recliner. Frequent calls to her family and friends were enjoyed. She liked to watch the bird activity around her feeders, read books and the Harlan Newspapers, put puzzles together, and watch NASCAR on TV.

Ruby was preceded in death by her parents; her husband, Ervin; her brother, Hans Frederickson; and her sister-in-law, Martha Frederickson. Left to cherish Ruby’s memory are her children, Carl Vollbaum of rural Shelby. Iowa, and Joy Buckland of Derby, Kansas.

As was her wish, a private funeral service was held on January 25, 2014, at the Graceland Cemetery in Avoca, Iowa. with Pastor Al Hazelton of First Assembly of God, Harlan, Iowa, officiating. The Burmeister-Johannsen Funeral Home in Harlan and Shelby, Iowa, was in charge of the arrangements. Condolences may be left online at www.burmeisterjohannsen.com.