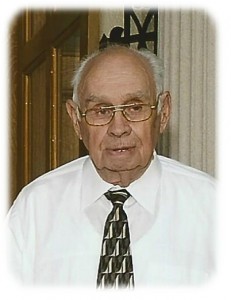 Robert Warren Brundige, the son of Warren B. and Kathryn (Poynter) Brundige, was born on March 4, 1921, in Richards, Missouri. When Robert was four years old, his family moved to Kirkman, Iowa. He attended Kirkman, Irwin, and Manilla, Iowa, schools, and graduated from Manilla High School in 1939. Robert helped his father and other area farmers before entering the United States Navy in 1942; he was discharged in 1946. He then worked for a few years in Michigan before returning to Irwin in 1949. Robert did farm work, and in 1952, began driving a school bus for Irwin. He soon became the school’s bus mechanic. He retired in July 1986.

Robert was active at the Greenridge Steam and Antique Show held each autumn in Irwin. He was a longtime member of the Austin Earl Hiatt American Legion Post #614, Irwin. An avid sports fan, Robert enjoyed driving Irwin-Kirkman-Manilla team busses and attending all area school sports. He also took time every day to have coffee at the Irwin Country Store.

The funeral service was held on Wednesday, January 15, 2014, at the Burmeister-Johannsen Funeral Home in Harlan, Iowa, with Rev. Ted Sieck of the Irwin Church of Christ officiating. Casket bearers were Mark Brundige, Brian Brundige, Jason Haley, Nate Steinmeyer, Jack deSousa, and Carroll Huff. Burial was in the Oak Hill Cemetery, Irwin, Iowa, with military rites provided by the Helmer-Reyelt American Legion Post #150, Harlan. The Burmeister-Johannsen Funeral Home in Harlan, Iowa, was in charge of the arrangements. Condolences may be left online at www.burmeisterjohannsen.com.