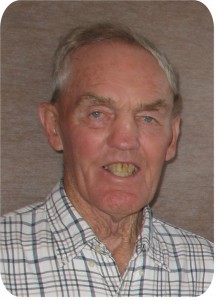 Ralph Allen Eggerss, the son of Paul Fred Carl and Helen Henrietta (Burmeister) Eggerss, was born on June 22, 1931, in rural Shelby, Iowa. He was educated in country schools and the Shelby schools, and graduated from Shelby High School in 1949. Ralph farmed with his father until he was drafted into the U.S. Army on November 18, 1953; he served in Germany and was discharged in October 1955. On February 3, 1957, he married Rhoda Joan “Joni” Miner in Avoca, Iowa. The couple farmed in the Shelby area until they bought their own farm in 1968; they retired from farming in September 2004. Ralph also did a lot of ag-related trucking in the Shelby County area.

Ralph was a member of the Untied Lutheran Church in Shelby, Iowa, where he had served on the church council. He was also a member of the Shelby American Legion Post #240. Ralph was an active baseball and basketball player who also enjoyed golf, bowling, snowmobiling, and snow skiing out west. He liked watching sports on television.

The funeral service was held on Tuesday, December 31, 2013, at United Lutheran Church in Shelby, Iowa, with Pastor Heather Ploen officiating. Nancy Armstrong served as the organist. Casket bearers were Jenifer Smith, David Smith, Luke Applegate, Jonathan Smith, Doug Applegate, and Brent Applegate. Burial was in the Shelby Cemetery in Shelby, Iowa. The Burmeister-Johannsen Funeral Home in Shelby, Iowa, was in charge of the arrangements. Condolences may be left online at www.burmeisterjohannsen.com.