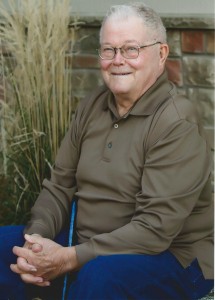 THERE WILL BE NO VISITATION OR VIEWING

Darwin Dale Warner, the son of Bruce Edwin and Iola Marie (Martin) Warner, was born on January 5, 1929, in rural Casey, Iowa. When Darwin was a child, his family moved to the Avoca and Shelby, Iowa, areas. He attended school there until the family’s move to Yutan, Nebraska, where Darwin graduated from high school in 1946. On August 19, 1949, Darwin married Arlene Marie Andersen at Immanuel Lutheran Church in Harlan, Iowa. The couple farmed in rural Harlan until 1962, when then they began farming in rural Avoca. Upon their retirement in 1990, Darwin and Arlene moved into Harlan.

Darwin was a member of Immanuel Lutheran Church in Harlan, Iowa. He enjoyed traveling and reading Louis L’Amour Western novels. During the years he lived in the Avoca area, he served a term on the church council, and was a Pottawattamie County Fair Board member.

Darwin D. Warner died on Tuesday, November 5, 2013, at Myrtue Memorial Center in Harlan, Iowa, having reached the age of 84 years and 10 months.

Darwin was preceded in death by his parents; one sister, Donna Lippold; and one grandson, Zane Warner. He is survived by his wife of 64 years, Arlene Warner of Harlan, Iowa; two daughters, Beverly (Ray) Courtney of Adel, Iowa, and Denise (Karl) Wellensiek of Syracuse, Nebraska; two sons, Dennis (Linda) Warner of Atlantic, Iowa, and Allan (Linda) Warner of Lake Havasu City, Arizona; one sister, Hazel “LaVon” Nihsen of Council Bluffs, Iowa; nine grandchildren; 12 great-grandchildren; and other relatives and friends.

A memorial service was held on Friday, November 8, 2013, at Immanuel Lutheran Church in Harlan, Iowa, with Pastor Steve Chellew officiating. Kathy Soetmelk served as the organist. Urn bearers were Darwin’s loving grandchildren. Burial of ashes was in the Harlan Cemetery, Harlan, Iowa. The Burmeister-Johannsen Funeral Home in Harlan, Iowa, was in charge of the arrangements. Condolences may be left online at www.burmeisterjohannsen.com.