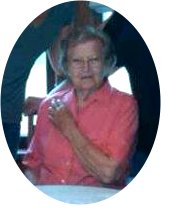 Mildred Leah Whannell, the daughter of Roscoe August and Lillian Katherine (Matthiessen) Buck, was born on August 31, 1919, in rural Persia, Iowa. In 1938, she graduated from Shelby (Iowa) High School, where she was a good basketball player. Mildred worked for Blue and White Grocery Store in Shelby before moving to Kansas City, where she was employed by Montgomery Wards and played basketball for their store team.

On December 28, 1945, Mildred married Andrew Bruce Whannell at the Presbyterian Church in Shelby. The couple farmed south of Shelby until 1959, when they began farming near Harlan, Iowa. They moved to their current farm place east of Harlan in 1969. Mildred worked as a nurse’s aid at Myrtue Memorial Hospital (now Myrtue Medical Center). In 1991, she began working as a CNA at the Elm Crest Retirement Community; she also worked part-time for Mickel’s Catering. At the age of 82, Mildred retired to care for her husband.

Mildred was a member of the First United Methodist Church in Harlan, Iowa. She was a hard worker who loved her farm, cooking, and baking. She was especially known for her delicious brownies.