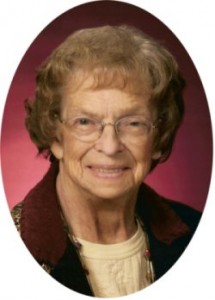 Leona “Irene” Peterson, the daughter of Otmann and Ida Marie (Johnson) Nielsen, was born on March 6, 1928, in Shelby, Iowa. She was raised in Shelby and graduated from Shelby High School in 1946. Irene married Wayne Willard Peterson on November 10, 1946, at the Shelby Lutheran Church in Shelby. The couple farmed at Corley and Walnut, Iowa, before moving to Avoca, Iowa, while Wayne was driving truck. They returned to Shelby in 1950, and Irene was employed by Grant and Ellen Rihner as a child care giver and housekeeper. Wayne and Irene were blessed with seven children.

Irene loved baking and cooking, and established a baking business from her home. She also worked as a baker and chef for area restaurants. For the next twenty years, Irene found joy in working for REM-Leadway as a craft teacher at their Shelby facility. Following her retirement from REM-Leadway, Irene assisted people in the community with transportation for various appointments and errands. She also helped others with both child and adult care duties.

Irene was a lifetime member of the United Evangelical Lutheran Church in Shelby, and had been baptized and confirmed there. She had served terms on the Church Council, as Sunday School Superintendent, Bible School Superintendent, and was a member of the Ladies Aide and “Couplettes”. Irene had numerous hobbies: ceramics, woodworking, garage sales, history, and genealogy. She enjoyed designing and making applique/pieced quilts for each family member. Irene also enthusiastically participated in Pinochle Club and Bingo. She was a member of the Legion Auxiliary for 32 years, the Shelby Alumni Association, PTA, Senior Citizen, Bridges, the Rebekahs in Shelby, and assisted with various community events.

Irene Peterson died on Tuesday, October 2, 2012, at Myrtue Medical Center in Harlan, Iowa, having reached the age of 84 years, 6 months, and 26 days.