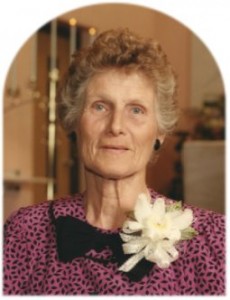 VISITATION DETAILS
Friday, September 7, 2012
1:00-8:00 PM
Burmeister-Johannsen Funeral Home
Harlan, Iowa
The Family will be present to greet friends from 5:00-7:00 PM
A Prayer Service will be held at 7:00 PM at the Funeral Home.

Marjorie Ingram, the daughter of Harry and Elizabeth (Clayton) Ingram, was born on December 14, 1921, in Defiance, Iowa. She attended Defiance schools through the tenth grade. On June 25, 1945, Marjorie married Wilbert Henry “Webb” Schraiter in Council Bluffs, Iowa. The couple farmed most of their married life until their move to Millard, Nebraska, where they both worked for the Millard School system. Following Webb’s death on August 11, 1980, in Omaha, Marjorie remained in her home until she went to live with her daughter, Connie, in 2005. Most recently, she had become a resident of a care center.

Marjorie played music in the LaVista (Nebraska) Old Timers band, and she enjoyed attending country music festivals with her daughter, Joan. She will be fondly remembered for her Navy bean soup.

Marjorie Schraiter died on Wednesday, September 5, 2012, at the Alegent Hospice House in Omaha, Nebraska, at the age of 90 years, 8 months, and 22 days.

The funeral service was held at the Burmeister-Johannsen Funeral Home, Harlan, Iowa, on Saturday, September 8, 2012, with Rev. Donna Ewert of the Congregational United Church of Christ presiding. Donna Ewert and Marjorie’s great-grandchildren provided the music. Serving as casket bearers were Doug Burmeister, Jean Feldman, John Zurek, Sue Standish, and Brett White. Burial was in the Union Township Cemetery in Defiance, Iowa. The Burmeister-Johannsen Funeral Home in Harlan was in charge of the arrangements. Condolences may be left online at burmeisterjohannsen.com.