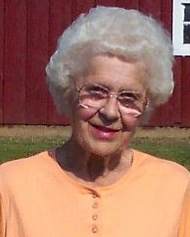 VISITATION DETAILS
There will be no viewing or visitation

Arlene Dagnes Hansen, daughter of Bill and Mary (Mathiasen) Hansen, was born March 31, 1919, near Jacksonville, Iowa. She departed this life July 25, 2012, at Myrtue Medical Center in Harlan, Iowa at the age of 93 years, three months and 24 days. She was educated in Polk No. 8 Country School and attended Bethlehem Lutheran Church in Jacksonville. She cared for her parents until her mother’s death in 1970, and then she did housekeeping for many years for Robert Kroman. Arlene has been a resident of Salem Lutheran Home in Elk Horn, Iowa since August of 2011.

Arlene was preceded in death by her parents; one brother, Bill Hansen; two sisters, Ida and Sylvia both in their youth; and also by a long time close friend, Robert Kroman. Survivors include one nephew, Ivan Hansen and his wife Janice of Harlan, Iowa; one niece, Freda and her husband Brent Littleton of Valley Falls, Kansas; sister-in-law, Bertha Hansen of Elk Horn, Iowa; and numerous friends.

A memorial service was held at the Burmeister-Johannsen Funeral Home in Harlan, Iowa, on Saturday, July 28, 2012, with Pastor Ron Rasmussen of the Bethlehem Lutheran Church in Jacksonville, Iowa, presiding. Burial of ashes was in the Jacksonville Cemetery, Jacksonville, Iowa. The Burmeister-Johannsen Funeral Home in Harlan was in charge of the arrangements. Condolences may be left online at burmeisterjohannsen.com.