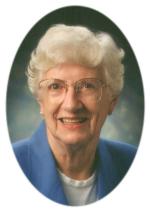 Bernice Irene Johnson, the daughter of Holger and Agnetta (Jorgenson) Pedersen, was born on November 12, 1918, in rural Kimballton, Iowa. After graduating from Kirkman (Iowa) High School in 1936, she attended summer school in Cedar Falls, Iowa, to obtain her teaching certificate. She then taught country school north of Irwin, Iowa, for four years. On June 3, 1941, Bernice married Keith Deen Johnson in Omaha, Nebraska. The couple lived in California during World War II; they returned to Harlan, Iowa, in 1954. Bernice again taught school, first in rural schools and then at Laurel School in Harlan. She earned her Bachelor’s Degree from Drake University in 1962. Bernice continued teaching until her retirement in 1980.

Bernice was a member of Immanuel Lutheran Church in Harlan, Iowa, where she was active in the quilting group and Bible studies. She was a life member of the National Education Association and an active volunteer at the Danish Immigrant Museum in Elk Horn, Iowa. Bernice loved traveling and camping with her husband; the couple had been to all 50 states. Bernice also enjoyed spending her time sewing.

Funeral services were held on Friday, October 6, 2006, at the Immanuel Lutheran Church in Harlan, Iowa, with Pastor Heather Ploen officiating. Marge Ahrenholtz served as the organist, and Lee Nelson was the soloist. Casket bearers were Don Andersen, Leo Goeser, Bruce Nelson, Richard Olsen, Bob Lewis, and Grant Thayer. Burial was in the Harlan Cemetery in Harlan, Iowa. The Burmeister-Johannsen Funeral Home in Harlan was in charge of the arrangements.