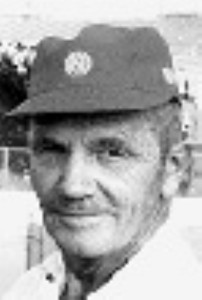 Melvin C. Dinesen, son of Thomas and Martha (Messerschmidt) Dinesen, was born on January 13, 1913, in Harlan, Iowa. He grew up on the family farm, attended Country School, and attended Harlan High School. In 1933, he joined the Navy; he served until 1937. During WWII, he joined the Merchant Marines, and served from 1942 to 1945 as a machinist in the Pacific. While stationed in Australia, he learned to sail, a pastime he continued to enjoy after retirement. After Mel’s honorable discharge, he settled in Oceanside, California, where he met the love of his life and future wife, Millie.

Mel began his lifelong career in motorcycles, especially building and tuning racing motorcycles. While he and Millie were starting their life together, their only transportation was an Indian motorcycle, which they rode to Harlan, Iowa, so Millie could meet his family. The couple soon moved to Bakersfield, California, where Mel worked as a mechanic for Trent’s Motorcycle Shop. In the 1950’s Mel and Millie opened their own shop, Mel Dinesen Motorcycles, where they both worked until their retirement around 1980. Over the years they sold many brands including Indian, AJS, Matchless, Royal Enfield, Parilla, Zundapp, Yamaguchi, and Yamaha. For decades, Mel entered motorcycles and took riders to the annual Daytona Florida 200 mile race. In 1972, he realized his highest accomplishment when his Yamaha with rider, Don Emde, won. That win elevated Mel to world class tuner status and Don Emde to the Motorcycle Hall of Fame Museum in Pickerington, Ohio. The motorcycle is now on display in that museum. Though Mel and Millie had no children of their own, they helped dozens of Bakersfield and Kern County, California, young men realize their racing dreams. Nearly all of these riders stayed in touch with them through the years.

Mel was preceded in death by his parents; his wife, Millie, on February 17, 1997; one brother, Leonard Dinesen; and one sister, Alice Mae Foster. He is survived by three nieces, Peggy Hess and Susan (Jerry) Lambert, both of Harlan, Iowa, and Rebecca (George) Finley of Lincoln, Nebraska; four nephews, Melvin (Janis) Dinesen of Harlan, Iowa, Donald (Chris) Dinesen of Bakersfield, California, Thomas (Lilah) Rogers of Mesa, Arizona, and Robert Rogers of Soquel, California.

A private family graveside service was held on Saturday, July 1, 2006, at the Harlan Cemetery in Harlan, Iowa. The Burmeister-Johannsen Funeral Home in Harlan was in charge of the arrangements.