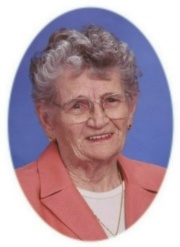 Maxine Sophia Johannsen, the daughter of Marx Jurgen and Minnie Louise (Lensch) Koos, was born on August 27, 1912, south of Walnut, Iowa. She attended school at Layton Township #5 and Walnut, Iowa, graduating from Walnut High School in 1930 with normal teachers’ training. After graduation, Maxine taught school for a brief time in Layton and Lincoln Townships in Pottawattamie County. She also worked at the original Bakers Grocery Store in Walnut, and later, at the Danish Inn in Elk Horn, Iowa. On June 13, 1934, Maxine married Arnold Christian Johannsen at her parents’ home. The couple made their home on a farm in Monroe Township for many years. In August, 1985, Arnold entered the Baptist Memorial Home in Harlan, Iowa. Maxine moved to Harlan on October 4, 1986, to be near her husband. Arnold died on December 28, 1987, in Harlan.

Maxine was baptized and confirmed at the Evangelical Lutheran Church, now the Peace United Church of Christ, in Walnut. She was active in the church, helping with the Women’s Guild, singing in the choir, and teaching Sunday School. Maxine was also a member of the Rebekah Lodge since 1932, where she was Past Noble Grand. She was a member of the Myrtue Memorial Hospital Auxiliary, the Monroe Friday Club, and the Birthday Pinochle Club. She was a former leader of the Monroe Merry Makers 4-H Club. Maxine found great enjoyment in knitting, making sweaters, afghans, slippers, and Christmas stockings for family and friends. She and Arnold enjoyed the outdoors and spent time at their trailer in Lake View, Iowa. They also worked the concession stand and later registered campers at Prairie Rose Lake for many years.

Funeral services were held on Wednesday, June 14, 2006, at Peace United Church of Christ in Walnut, Iowa, with Pastor Gail Muckey officiating. Vivian Storjohann served as the organist, and John Clayton was the soloist. Casket bearers were Dennis Jensen, Ward Koos, Larry Manz, Dennis Thomsen, Lowell Andersen, and Galan Johannsen. Burial was in the Layton Township Cemetery in Walnut, Iowa. The Burmeister-Johannsen Funeral Home in Harlan was in charge of the arrangements.