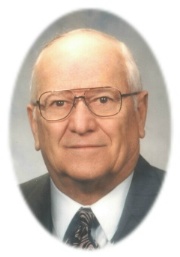 Glenn Wilson Zimmerman, the son of Ernest Wilson and Carrie Rosetta (Gill) Zimmerman, was born on May 17, 1922, in Shelby, Iowa. He attended school in Shelby and graduated from Shelby High School in 1940. After graduation, Glenn worked at Harkets Restaurant in Omaha, Nebraska and as a farmhand. He entered military service with the United States Army Air Force on October 5, 1942, and served in World War II. On April 28, 1944, he married Betty Jane Welch in Harlan, Iowa. Following Glenn’s discharge from the service in January, 1946, the couple made their home in Harlan, where Glenn worked for the Iowa State Highway Commission until his retirement on August 31, 1984.

As a youth, Glenn was a member of the Presbyterian Church in Shelby, Iowa. He later became a member of the Congregational United Church of Christ in Harlan, Iowa. He enjoyed doing volunteer work and helping his friends and neighbors. He also liked spending time doing woodcrafts and woodworking. He was active at the Harlan Senior Center where he delivered meals and washed dishes. He was a member of the Helmer Reyelt American Legion Post #150.

Glenn W. Zimmerman died on Tuesday, February 21, 2006, at Jennie Edmundson Memorial Hospital at the age of 83 years, 9 months, and 4 days.

Glenn was preceded in death by his parents; his wife, Betty, on November 2, 2004; and two brothers, Alfred Zimmerman and Ralph Zimmerman. Survivors include two sons, Jim (Rhonda) Zimmerman of Omaha, Nebraska, and Dick (Kim) Zimmerman of Cedar Falls, Iowa; one daughter, Carol (Steve) Sidwell of Cordova, Illinois; nine grandchildren; eight great-grandchildren; and other relatives and friends.

Funeral services were held on Friday, February 24, 2006, at the Congregational United Church of Christ in Harlan, Iowa, with Rev. Donna Ewert officiating. Linda Zimmerman served as the organist. Casket bearers were Jim Zimmerman, Dick Zimmerman, Ryan Zimmerman, Kelly Zimmerman, Clint Jensen, Grant Dess, and Stephen Sidwell. Burial was in the Harlan Cemetery in Harlan, Iowa. The Burmeister-Johannsen Funeral Home in Harlan was in charge of the arrangements.