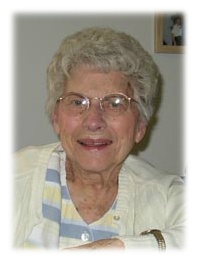 Aletha Frieda (Jedele) Nelson was born on July 26, 1919, and went to her heavenly home on Friday, February 17, 2006. She was born on a farm in Crawford County, Iowa, to Karl and Frieda Rath Jedele, the fourth of eight children. She became a child of God on October 8, 1919, through the Sacrament of Baptism, and confirmed her faith in Jesus Christ in March of 1932 at Zion Lutheran Church in Denison, Iowa. Her memory verse was from Philippians 4:13, “I can do all things through Christ which strengtheneth me.” Aletha attended Zion Lutheran School for eight years and graduated from Denison High School in 1936. After graduation she went to work in the County Superintendent of Schools office, taught grades 1-4 at Zion Lutheran School for two years, and returned to the County Superintendent’s office from 1939 until 1945 when her husband returned from the war.

Aletha married Russell Nelson of Irwin, Iowa, on October 19, 1941. Two children were born to Russ and Leth, Colleen Classen of Utica, Nebraska, and James Nelson of Creston, Iowa. They farmed near Irwin from 1945 to 1962. Russell then went into carpentry and Aletha worked at the ASCS office in Harlan, Iowa, for 23 years, enjoying her office work involving the farm programs.

After Aletha retired from the ASCS office at age 66, she learned to do hand-punch brailling and later with a manual machine. She went on to become certified by the US Library of Congress and volunteered for Lutheran Braille Workers Inc for more than 10 years.

Working for the Lord in whatever capacities she could was of the greatest importance to Aletha her whole life, from holding offices at church to helping clean the church. She also enjoyed her involvement with the Irwin Keenagers, the SW Iowa Agency on Aging, and quilting with the ladies at the Senior Center and at church.

She entered the nursing home in Friend, Nebraska, in August of 2001 where her daughter works. She and Colleen enjoyed many hours together over the next several years.

Visitation was held at Burmeister-Johansen Funeral Home in Harlan, Iowa, on Sunday, February 19, 2006. Funeral services were held at St. Paul’s Lutheran Church in Irwin, Iowa, on Monday, February 20, 2006, with Pastor Ron Rasmussen officiating. Alice Pieper served as the organist. Casket bearers were Tim Classen, Vernon Brue, Keith Benson, Greg Duncan, Robert Jedele, and Darrell Nelson. Burial was in the Danway Cemetery, rural Shelby County, Iowa. In lieu of flowers, memorials may be of the donor’s choice or to ones established by the family. Burmeister-Johannsen Funeral Home, Harlan, Iowa, was in charge of the arrangements.