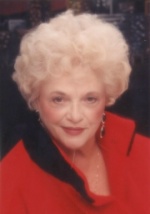 Virginia Clare “Ginnie” O’Neil Greve, the daughter of Fallas Commodore and Nellie Ester (Devine) Knox, was born on April 15, 1922, in Council Bluffs, Iowa. She was raised in Council Bluffs and attended Council Bluffs schools. On February 17, 1949, Ginnie married James M. O’Neil in Omaha, Nebraska. She was especially fond of her in-laws, Dr. James A. and Gertrude M. O’Neil, who were very good to her.

For many years, Ginnie taught high school speech, drama, and debate classes at Notre Dame High School in Omaha. She retired from teaching in 1970. James died on September 9, 1982, in Omaha. In 1984, Ginnie met Everett Andrew Greve at a dance; they were married on July 19, 1986, in Jacksonville, Iowa.

Ginnie was a 25-year member of Blessed Sacrament Church in Omaha before becoming a member of St. Michael’s Catholic Church in Harlan, Iowa, where she taught Sunday school. She was a member of the Omaha Botany Club, was involved in Omaha theatre groups, and loved to travel, paint, and dance. Ginnie also actively promoted education.

Ginnie was preceded in death by her parents and her first husband, James M. O’Neil. She is survived by her second husband, Everett Greve of Jacksonville, Iowa; one son, James J. (Wendy) O’Neil of Colleyville, Texas; one daughter, Kathi (Bill) Warren of Papillion, Nebraska; one sister, Patricia (Ladd) Pokorney of Carter Lake, Iowa; five grandchildren; two great-grandchildren; four step-grandchildren; three step-great-grandchildren; and other relatives and friends.