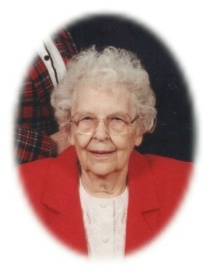 Melba LaVon Jorgensen, the daughter of Hoyt A. and Doris E. (Dent) Tague, was born near Kirkman, Iowa, on January 6, 1915. She attended Polk #8 through eighth grade and graduated in 1932 from Harlan (Iowa) High School. She took normal training and many courses from Drake and Iowa State Teachers College. Melba’s first teaching job was at Polk #8.

She made her first home in Fiscus, Iowa, and later lived in Harlan, Iowa, for many years. Melba married Harry Jorgensen in May, 1935. After Harry’s death in August, 1946, she and Gary lived with her parents, who helped her raise her young son. She first taught in the Harlan rural schools, and later became the case worker for the Iowa Department of Social Services in Audubon County. When Melba retired she became the caretaker for her elderly parents, and cared for them for several years until their deaths. Melba lived in her own home until July, 2004, when she moved to the Elm Crest Retirement Community in Harlan.

Melba was a lovely Christian woman who taught Sunday School for the Churches of Christ for decades, both while she was working full time and after she retired. She liked bowling, crossword puzzles, music and a peaceful, quiet lifestyle. Melba was a member of Business and Professional Women and always enjoyed children. She enjoyed making others laugh and others enjoyed her laugh and cheerful disposition. Melba truly loved her family and delighted in her grandchildren and great-grandchildren.

Melba was preceded in death by her parents; her husband; and her brother, Wayne (Bill) Tague. Those who celebrate her life include one son, Dr. Gary (Camelia) Jorgensen of Harlan, Iowa; one sister Lynn Rice of Omaha, Nebraska; one brother Hoyt (Phyllis) Tague, Jr. of Mountain Home, Arkansas; three grandchildren, Richard Jorgensen of Audubon, Iowa, and Rachelle (Todd) Sorensen and Christina (David) McIllwain, both of Hendersonville, Tennessee; nine great-grandchildren; nieces and nephews; and a great many friends.

Memorial services were held on Tuesday, January 17, 2006, at the Burmeister-Johannsen Funeral Home in Harlan, Iowa, with Roy North, Evangelist, officiating. Tom Gaer gave the prayer, and the Scripture passage of II Peter 3:13-14 was read by Eugene Rasmussen. Burial of ashes was in the Redline Cemetery in rural Shelby County, Iowa. The Burmeister-Johannsen Funeral Home in Harlan was in charge of the arrangements.