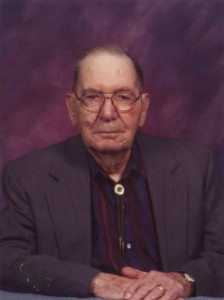 Charles James Andersen, the son of Lawrence D. and Margaret J. (Andersen) Andersen, was born on November 10, 1914, in Harlan, Iowa. He grew up on the family farm and graduated from Harlan High School in 1932. After graduation, Charles worked as a hired man for Frank Meyer and Martin Arentson. While attending a dance in Corley, Iowa, he met Marcella Peters. Charles and Marcella were married on January 6, 1937, at the Lutheran Parsonage in Harlan. The couple farmed for many years near Corley, Walnut (Iowa), and Harlan, and at one point, Charles also drove truck part time for Willie Sorensen. In 1964, Charles and Marcella retired from farming and moved into Harlan. Charles then worked part time for ASCS before being employed as a feed salesman by Walnut Grove. In 1973, he began working for Drs. Christensen, Havick, and Pleak as the desk clerk at their Vet Clinic; he retired from this position in 1981. He then worked part time for Dr. Early until 1985.

In 1999, Charles and Marcella became residents of the Independent Living Apartments at the Elm Crest Retirement Community. Marcella died on November 13, 2003, in Harlan. Charles had recently moved to Avoca Lodge Assisted Living in Avoca, Iowa.

Charles was a lifelong member of Immanuel Lutheran Church in Harlan. He was a quiet man who enjoyed polka music, playing cards, and reading westerns. He had fond memories of his years as a farmer, and especially the time spent caring for his livestock.

Funeral services were held on Monday, December 29, 2008, at Immanuel Lutheran Church in Harlan, Iowa, with Pastor Steve Chellew officiating. Marge Ahrenholtz served as the organist. Casket bearers were Dean Schueman, Steven Schueman, David Schueman, Scott Andersen, Alex Hargens, Tony McCord, and Rodney Hargens. Burial was in the Harlan Cemetery in Harlan, Iowa. The Burmeister-Johannsen Funeral Home in Harlan was in charge of the arrangements. Condolences may be left online at www.burmeisterjohannsen.com.