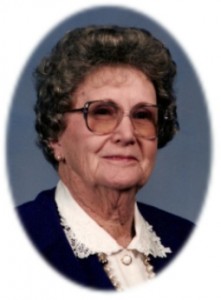 Vera Leona Long, the daughter of Roy and Myrtle (Brown) Edwards, was born on October 29, 1915, near Shelby, Iowa. She grew up on farms in the Shelby area and graduated from Shelby High School in 1933. On April 4, 1934, Vera married Wilbur Henry Graybill in Council Bluffs, Iowa. The couple had four children: Norma, Joyce, Wayne, and Derald. They farmed in the Persia (Iowa) area until 1943, when they moved to a farm near Tennant, Iowa; they farmed there for 29 years. Following retirement, Vera and Wilbur moved to Shelby and wintered in Arizona. Wilbur died in April, 1976, in Council Bluffs, Iowa.

Vera married her second husband, Cloyce Beresford Long, in 1977. They enjoyed 14 years of marriage before his death, in January, 1992, in Harlan, Iowa. Vera remained in her home until 1997, when she became a resident of the Elm Crest Retirement Community in Harlan.

Vera was a member of the Shelby United Methodist Church. She enjoyed cooking, sewing, working on the farm, square dancing, playing cards, and gardening. She especially liked to visit the casinos.

Vera L. Long died on Saturday, November 29, 2008, at the Elm Crest Retirement Community in Harlan, Iowa, having reached the age of 93 years and 1 month.

Funeral services were held on Tuesday, December 2, 2008, at the Shelby United Methodist Church in Shelby, Iowa, with Pastor Orris L. Drake officiating. Shirley Pattee was the organist, and Reva Jean Drake was the soloist. Honorary casket bearers were John and Helen Barrett. Active casket bearers were Mark Gahm, Krista Austin, Nikki Graybill, Karl Lee Gahm, Wayne Graybill, Jr., and Rodney Graybill. Burial was in the Shelby Cemetery in Shelby, Iowa. Memorials may be made to the Shelby United Methodist Church. The Burmeister-Johannsen Funeral Home in Shelby was in charge of the arrangements. Condolences may be left online at www.burmeisterjohannsen.com.