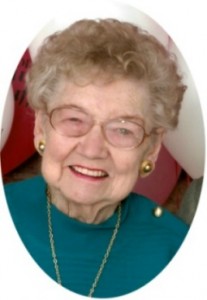 She attended school at Jackson Township No.8 for six years and Monroe Township No.1 for two years. After graduating with honors from the eighth grade in 1935, she went to work in many homes in the area and also helped with the farming by driving the horses and tractors and milking cows.

On August 20, 1941, she married Victor Leo Hoogensen at the Bethlehem Lutheran Church in Jacksonville, Iowa. In later years, their claim was that they belonged to that church longer than any other couple because both were baptized and confirmed there, too. She was active in Luther League, the Women’s Organization, and was Superintendent and a teacher for Sunday School. She was also a leader for the Junior Mission Society and 4-H.

Victor and Dorothy lived on three different Jackson Township farms before moving to Harlan in 1980, and they enjoyed fifteen winters in their mobile home in Apache Junction, Arizona.

Dorothy died peacefully in her sleep at Myrtue Memorial Hospital in Harlan on November 25, 2008, having attained the age of 86 years and eight months.

Preceding her in death were her parents, brothers Elliot and Everett Greve, sisters-in-law Mabel Greve, Arlene Hoogensen, and Ginnie Greve, and brother-in-law Kenneth Christoffersen. Survivors include her husband Victor of Harlan, her children Ken and Patsy (Mayr) Hoogensen of West Des Moines, Bob and Judy (Swisher) Hoogensen of Harlan, Vicki and Manny Salazar of Harlan, and Linda Hoogensen Graff of West Des Moines, brother Harvey and Doris Greve of Walnut, sister Elaine Christoffersen of Kimballton, sister-in-law Elaine Greve Hoffman of Avoca, and brother-in-law Gilbert Hoogensen of Harlan. She is also survived by five grandchildren and nine great-grandchildren: Jeff and Susan Hoogensen of Marshalltown; Jon and Angie, Jacob, Finn, and Laurel Hoogensen; Julie and Ted, Grace, Olivia, and Andrew Peelen all of West Des Moines; Jennifer and Gregg and Garrett Tiehen of Harrisburg, South Dakota; and Steve and Kara, Kate and Mallory Hoogensen of Ankeny. Also surviving Dorothy are nieces, nephews, other relatives, and many friends.

Funeral services were held on Saturday, November 29, 2008, at Bethlehem Lutheran Church in Jacksonville, Iowa, with Pastor Ron Rasmussen officiating. Peggy Doonan was the organist, and Phyllis Larsen and Adrienne Petersen were the vocalists. Casket bearers were Karl Greve, Peter Greve, Gerry Greve, Bryan Greve, Dave Greve, and Don Christoffersen. Burial was in the Jacksonville Cemetery in Jacksonville, Iowa. The Burmeister-Johannsen Funeral Home in Harlan was in charge of the arrangements. Condolences may be left online at www.burmeisterjohannsen.com.