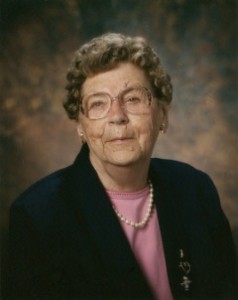 Virginia Mae Hulsebus, the daughter of James Harold and Cecil L. (Sunderland) Philson, was born on May 8, 1914, in rural Harlan, Iowa. She grew up in rural Harlan and moved into town with her family in 1920, where she attended Harlan schools. After graduating from Harlan High School in 1932, Virginia taught country school in Jackson and Center Townships. On October 20, 1934, she married John Theodore Hulsebus in Decorah, Iowa. From 1943-1945, under an emergency war teaching certificate, Virginia again taught school.

From 1973-1979, Virginia and John spent time at their retirement home on Big Stone Lake in Ortonville, Minnesota. John died on January 18, 1995, in Omaha, Nebraska.

Virginia joined the First United Methodist Church in Harlan in 1927. She became a member of the Zenobia Rebekah Lodge #286 in 1933, and continued membership until her death. Virginia received the Lodge’s highest honor, “Decoration of Chivalry” on July 17, 1986. She enjoyed sports, gardening, and feeding and watching birds. Virginia loved people and found great pleasure in visiting with them.

Virginia M. Hulsebus died on Tuesday, November 25, 2008, at Myrtue Medical Center in Harlan, Iowa, having reached the age of 94 years, 6 months, and 17 days.

Funeral services were held on Saturday, November 29, 2008, at the First United Methodist Church in Harlan, Iowa, with Rev. Dave Swinton officiating. Marge Ahrenholtz was the organist, and Lee Nelson was the soloist. Casket bearers were Mark Hulsebus, Travis Culp, Don Petsche, Justin Hulsebus, Joel Hulsebus, Jerry Hulsebus, Mike Humphrey, and Tom Humphrey. Burial was in the Harlan Cemetery in Harlan, Iowa. The Burmeister-Johannsen Funeral Home in Harlan was in charge of the arrangements. Condolences may be left online at www.burmeisterjohannsen.com.