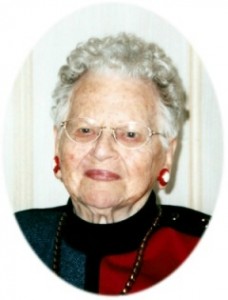 Thelma Christena Olson, age 98, formerly of Irwin, died Thursday, November 20, 2008, at Elm Crest Retirement Community in Harlan. Funeral services were held at 10:30 a.m. on Saturday, November 22, 2008, at St. Paul’s Lutheran Church in Irwin, with burial at Rose Hill Cemetery near Kirkman. Visitation was held from to 2:00 to 9:00 p.m. on Friday, November 21, 2008, at Burmeister-Johannsen Funeral Home in Harlan. Pastor Ron Rasmussen served as both clergy and soloist. Nancy Larson was the organist. Casket bearers were Eugene Juhl, LeRoy Heese, Cyrus Monson, Eugene Monson, Dick Sorensen, and Danny Mickelson. Memorials may be made to St. Paul’s Lutheran Church and the Irwin Fire and Rescue Department.

Thelma was born June 3, 1910, near Irwin, and lived most of her life in the Irwin area. As a young person, Thelma spent several years living in Minnesota in the Spicer, New London, Belgrade, and Willmar areas. In 1933 she married Bertram Olson and the couple lived near Hancock for 10 years. Then the family moved to a farm southeast of Irwin, where they farmed for many years. Following retirement, Bert and Thelma moved to Irwin.

Thelma is survived by two daughters, Cherrie Wiese of Topeka, KS, and Wanda (Ron) Sabby of Wallingford, by a daughter-in-law, Sue Olson of Sioux City, by three sons, Dean (Joyce) Olson of Minden, Alan Olson of LeMars, and David Olson of Lake Park, by a son-in-law, Tom Merritt of Harlan, by thirteen grandchildren, and by fourteen great-grandchildren. She is also survived by a brother, Elmer (Alice) Monson of Huntley, IL, and by a sister-in-law, Lillian Monson of Green Valley, AZ, and by many nieces and nephews.

Thelma was preceded in death by her husband, Bert, by three sons, Clyde, Duane, and Stephen, by one daughter, Helen Merritt, and by one daughter-in-law, Sally Olson. Also preceding her in death were her parents, Ephriam and Mollie Monson, her brothers, Sanford, Herman, Orval, and Archie, and her sisters, Evona Monson, Alvah Johnson, Myrtle Mason, and Ruby Pump.

As a lifetime member of the Lutheran Church, Thelma was active as a Sunday school teacher, a circle member, and a church committee person. She was a member of the American Legion Auxiliary and was a Gold Star Mother.

In her retirement years, Thelma enjoyed gardening, painting, traveling, and fishing. She spent many hours fishing and relaxing at East Okoboji at the cabin of her close friend, Arline Gans.