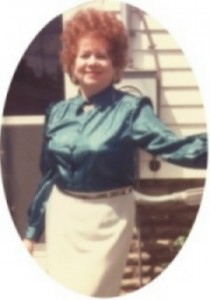 Mildred Lucille Greiner, the daughter of Carl T. and Mathilda (Knudson) Brue, was born on July 20, 1918, in rural Manilla, Iowa. She was raised south of Irwin, Iowa, and graduated from Irwin High School in 1935. Mildred lived in California for a short time before returning to Iowa. In the mid-1940s, she married Larry Greiner. Mildred settled in Harlan, Iowa, where she owned and operated the Greiner Café for many years.

Mildred was a member of the Auxiliary of the Harlan VFW Post #941. She enjoyed gardening and loved flowers. She and Larry were interested in bee-keeping. Mildred was a good cook, and loved music and dancing.

Mildred was preceded in death by her parents; her husband, Larry Greiner; one sister, Norma Barratt; and two brothers, Harold Brue and Lavern Brue. She is survived by one stepson, Bruce (Sharon) Greiner of Chicago, Illinois; one brother, Bill (Peggy) Brue of Irwin, Iowa; nieces and nephews; and other relatives and friends.

A graveside service was held on Thursday, November 20, 2008, at the Harlan Cemetery, Harlan, Iowa, with Pastor Ron Rasmussen of St. Paul’s Lutheran Church, Irwin, officiating. Casket bearers were Mildred’s family and friends. The Burmeister-Johannsen Funeral Home in Harlan was in charge of arrangements. Condolences may be left online at www.burmeisterjohannsen.com.