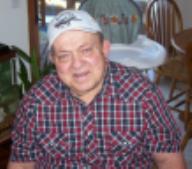 Herbert James Mengwasser, the son of John and Marcella (Leenan) Mengwasser, was born on June 18, 1928 in Union Township, Shelby County, Iowa. He was raised in the Defiance, Iowa, area and attended Defiance area country school. For a time, he drove a produce truck for Goeser Produce in Defiance. In December 1946, Herb enlisted in the U.S. Army Air Corps and was stationed at Fort Crook, Nebraska. In 1948, Herbert was assigned to the 5001st Supply Squadron in Alaska as an ammunition worker. He was honorably discharged as a Private First Class in the USAF on December 12, 1949.

On May 1, 1952, Herbert married Sarah Corinne Walker at St. Michael’s Catholic Church in Harlan, Iowa. Herbert worked for a plumbing firm in Harlan before joining the Harlan Municipal Utilities. He worked within the Water Department until his retirement in 1993. Sarah died on January 12, 2003, in Council Bluffs, Iowa. Herbert became a resident of the Woodlands Nursing Home in Council Bluffs in March of 2008.

Herbert was a member of St. Michael’s Catholic Church in Harlan. He enjoyed gardening and raised vegetables. He also participated in the annual Christmas Lights Contest in Harlan.

Preceding Herbert in death were his wife of 51 years, Sarah Corinne Mengwasser; his parents; one sister, Betty Jean Gross; and one brother, Raymond Mengwasser. Survivors include his one and only daughter, Elizabeth (John) Plott of Council Bluffs, Iowa; one granddaughter, Jessica (Kevin) McCarthy and two great grand children, Alexis and Levi McCarthy, all of Council Bluffs, Iowa; two brothers, Bernard Mengwasser of Altoona, Iowa, and Louis (Rosie) Mengwasser of Denison, Iowa; and one uncle, Lawrence Leenan of Harlan, Iowa.

Mass of Christian Burial was held on Tuesday, November 18, 2008, at St. Michael’s Catholic Church in Harlan, Iowa, with Father Robert Hoefler celebrating. Kate Kohorst and Maryalyce Dotzler served as the musicians. Casket bearers were Kevin McCarthy, Tom Walker, Chuck Matthews, Jeff Mengwasser, Russell Mengwasser, and Danny Mengwasser. Burial was in the Jacksonville Cemetery in Jacksonville, Iowa. The Burmeister-Johannsen Funeral Home in Harlan was in charge of arrangements. Condolences may be left online at www.burmeisterjohannsen.com.