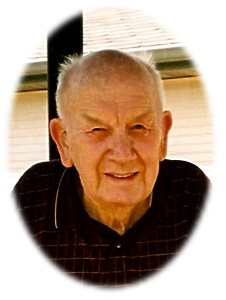 Everett Andrew Greve, son of Peter and Alvina (Henricksen) Greve, was born on September 3, 1919 on a farm southeast of Harlan, Iowa. He attended Jackson #8 country school through the eighth grade and then worked for various area farmers. On August 6, 1941 Everett married Mabel Hansen in Omaha, Nebraska. The couple farmed for six years before purchasing a trucking business from Marcussen Brothers. Mabel passed away in August 1975. On July 19, 1986 Everett married Virginia “Ginnie” O’Neil. She passed away in January 2006. Everett continued to operate a gas station and tire business until January 2008. On February 6 of this year he became a resident of the Salem Lutheran Home in Elk Horn, Iowa.

Everett was an active member of the Bethlehem Lutheran Church in Jacksonville, Iowa. When he was young he enjoyed playing baseball and later coached the Jacksonville cub team for nine years. Three of those teams won the Marne Tournament! Everett liked to dance, bowl, golf, and play cards, especially Jacksonville Pitch. He was well known for his great sense of humor and big, warm smile.