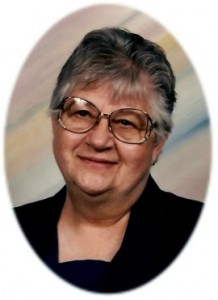 Daisy June James, the daughter of John Lewis and Daisy (Whiltshire) Lidgett, was born on November 16, 1924, in Elgin, Nebraska. She attended school in Elgin and Neligh, Nebraska. On January 18, 1940, in Yankton, South Dakota, Daisy married George Hanley James. The couple moved to the Harlan, Iowa, area in 1941, where Daisy was employed as a waitress for Ray and Fern Rasmussen. She also helped area farmers with their farm work. For many years, Daisy and George worked on a rented farm located south of Harlan. George died on June 19, 1973; during that fall, she moved into Harlan.

From 1966-1980, Daisy worked at the Baptist Memorial Home in Harlan. In 1980, she became a 911 Operator at the Shelby County Communication Center; she remained at this job until her retirement in 1993.

Daisy, whose favorite color was red, enjoyed reading, playing cards with her grandchildren, and doing crossword puzzles. She spent time crocheting and mending, and was a great cook. Having lived through the Great Depression, she was known as a thrifty individual. After her retirement, she enjoyed babysitting. Daisy recognized the importance of blood donation, and had the distinction of having personally donated nearly eight gallons.

Daisy was preceded in death by her parents; her husband, George Hanley James; and two sisters, Dolly Imsiek and Roma Good. She is survived by three sons, Hanley James of North Carolina, Rusty (Claudia) James of Des Moines, Iowa, and Michael (Kay) James of Council Bluffs, Iowa; one daughter, Patty (Pete) Stein of Portsmouth, Iowa; one sister, Dona Ganskow of Marbury, Maryland; 11 grandchildren; 11 great-grandchildren; and other relatives and friends.

Funeral services were held on Monday, October 27, 2008, at the Congregational United Church of Christ in Harlan, Iowa, with Pastor Donna Ewert and Pastor Roger Good officiating. Leota Swensen served as the pianist. Casket bearers were Sam Stein, Jorge Stein, Peter Stein, Scott James, Jason James, Tim Goeser, Shawn James, and Brian James. Burial was in the Harlan Cemetery in Harlan, Iowa. The Burmeister-Johannsen Funeral Home in Harlan was in charge of arrangements. Condolences may be left online at www.burmeisterjohannsen.com.