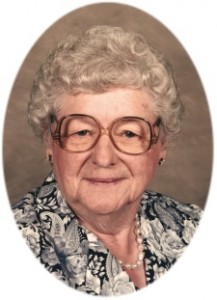 Zelda Marie Johannsen, the daughter of Herman C. and Amalia M. (Karstens) Burmeister, was born on November 8, 1914, near Corley, Iowa. She attended Fairview Township country school through the eighth grade. On August 2, 1939, Zelda married Norman Russell Johannsen in Avoca, Iowa. From 1940-1975, the couple farmed in Jackson and Monroe Townships. In 1975, their son, Galan, and his family moved to the farm, and Norman and Zelda moved to an acreage in Monroe Township. They lived there for ten years before retiring to Harlan, Iowa. In May, 2007, Zelda became a resident of the Avoca Nursing and Rehab Center in Avoca, Iowa.

Zelda helped with farm work, gardening and helping pick corn. She and Norman enjoyed traveling south to Texas and Arizona. They liked to spend time camping, fishing at area lakes, playing cards, and dancing. Zelda loved to do quilting for herself, her family, and her church.

Zelda was an active member of Peace United Church of Christ in Walnut, Iowa, where she had served as a Sunday School teacher and superintendent. She was a member of the Farm Bureau Women, and was named the Farm Bureau Homemaker of the Year in 1954. Zelda was involved in various neighborhood clubs, including the Meet Your Neighbor Club and the Friday Club.

Funeral services were held on Monday, October 20, 2008, at Peace United Church of Christ in Walnut, Iowa, with Rev. Gail Muckey and Wayne Paulsen officiating. Sarah Kock served as the pianist, and Lesley Krummel, Amber McGreevy, and Eric Johannsen were the vocalists. Casket bearers were LuAnn Jensen, John Krummel, Michael Krummel, Bruce Krummel, Eric Johannsen, Sarah Fink, and Reid Johannsen. Burial was in the Layton Township Cemetery in Walnut, Iowa. The Burmeister-Johannsen Funeral Home in Harlan was in charge of arrangements. Condolences may be left online at www.burmeisterjohannsen.com.