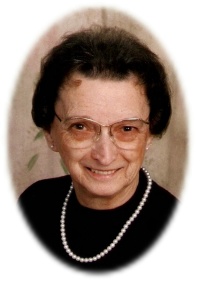 Eleanor Cora Benson, the daughter of Adolph and Nellie (Hanson) Olson, was born on August 17, 1914, in rural Irwin, Iowa. She attended Irwin and Harlan (Iowa) High Schools, graduating in 1932. She received her teaching certificate and taught at the Danway Country School for several years. On October 14, 1934, Eleanor married Jesse Milan Benson at Martin Benson’s home in Irwin. The couple farmed east of Irwin for many years, and Eleanor was a valuable helper on the farm. She later worked in the kitchen at the Irwin Community School in Irwin, and as a ward clerk at Myrtue Medical Center in Harlan.

After Jesse’s death, on February 28, 1968, in Omaha, Nebraska, Eleanor remained on the farm. In 1970, she moved into Irwin, where she lived until 2004. She then moved to the Westridge Apartments in Harlan. Recently, Eleanor had become a resident of the Manilla Manor in Manilla, Iowa.

Eleanor was an active member of St. Paul’s Lutheran Church in Irwin, Iowa, where she had served as Sunday School superintendent and was a member of the ladies groups. She enjoyed quilting and was well-known for making her wonderful chicken noodle soup. A dedicated volunteer, Eleanor was awarded the 1989 Iowa Governor’s Volunteer Award.