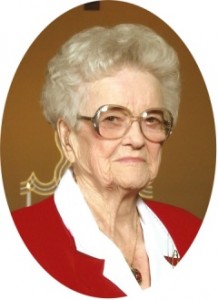 Esther Amelia Becker, the daughter of Raymond Oliver and Maude (Evans) Davis, was born on August 24, 1913, on a farm near Persia, Iowa. She grew up surrounded by a large family, including aunts, uncles, and cousins. Esther attended the Pleasant Ridge Country School which was located right next to her family’s farm. She later attended Tennant (Iowa) High School.

At the age of thirteen, Esther experienced a life-threatening accident on the family farm. During her recovery, her older brother brought a new friend, Herbert Becker, home for Sunday dinners with the family. When Esther was 17, Herb proposed; they were married at the First Methodist Church Parsonage in Harlan, Iowa, on January 28, 1931. After they were married, they moved to Russell, Iowa, where Herb had grown up. On November 6, 1945, Esther and Herb moved to her family farm home near Persia. Years later, they moved to a home north of Shelby, Iowa, where they were hired to manage a farm for Bob Cooper. They worked hard on the farm, raising livestock and grain crops. Herb died on May 24, 1985. Esther lived alone on the farm and continued to drive until she was ninety years old. She then became a resident of the Elm Crest Retirement Community in Harlan, Iowa.

Esther was a member of the Tennant United Methodist Church, where she was involved with the ladies of the church. A dedicated homemaker who was known for her homemade noodles and fried chicken, Esther was named Homemaker of the Year by the Harlan newspaper. She took loving care of her family and friends, and enjoyed crocheting, knitting, gardening, and bowling in her spare time. Christmas was a special time for her, and she decorated both the inside and outside of her home for the season. Esther loved to travel to California to visit with her daughter, Karean, and family.

Esther A. Becker died on Tuesday, October 7, 2008, at the Elm Crest Retirement Community in Harlan, Iowa, having reached the age of 95 years, 1 month, and 13 days.