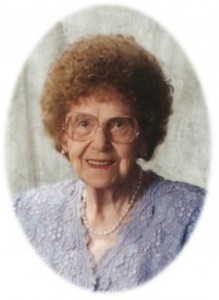 Dagny Amalia Svendsen, the daughter of Christian and JoHanna (Jensen) Swensen, was born on October 31, 1911, in Denmark. At the age of two, she came to the United States with her parents. After attending country school through the eighth grade, Dagny worked as a hired girl for area familes. On October 31, 1932, Dagny married Wilbert Svendsen in Botna, Iowa, northeast of Irwin, Iowa. From 1941-61, the couple farmed east of Kirkman, Iowa. Following their farm sale, Dagny and Wilbert moved to Harlan, Iowa. Dagny worked for the Harlan Community School’s lunch program from 1964-77, and served as the program director for several years. Wilbert died on March 17, 2002. Dagny later became a resident of the Elk Horn Lutheran Home in Elk Horn, Iowa.

Dagny was a member of Grace Baptist Church in Harlan, Iowa. She had previously taught Sunday School at Bethel Baptist Church, and served on the Women’s Missionary Fellowship. Dagny enjoyed spending time crocheting afghans for family members, and was an avid Harlan sports fan. She and Wilbert liked to travel, and had once visited Hawaii.

Dagny A. Svendsen died on Saturday, September 6, 2008, at Myrtue Medical Center in Harlan, Iowa, having reached the age of 96 years, 10 months, and 6 days.