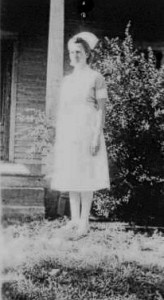 Elizabeth Emma Booth, the daughter of Emil William and Emma Christina (Pieper) Stuhr, was born on February 23, 1918, in Minden, Iowa. She graduated from Tennant (Iowa) High School in 1936, and from Nebraska Methodist Hospital as a registered nurse (RN) in 1941. She first practiced nursing at the Red Oak (Iowa) Hospital, and later spent many years as a nurse at Myrtue Medical Center in Harlan, Iowa.

Elizabeth was a member of the Congregational United Church of Christ in Harlan, Iowa. She enjoyed cooking, reading, sewing, and taking walks. She loved nature and visiting with family members.

Elizabeth was preceded in death by her parents; her husband, Nathaniel P. Booth; and one infant brother. She is survived by one brother, Robert E. (Betty) Stuhr of Shelby, Iowa; three nieces; one nephew; and other relatives and friends.

Funeral services were held on Monday, August 18, 2008, at the Burmeister-Johannsen Funeral Home in Harlan, Iowa, with Rev. Donna Ewert of the Congregational United Church of Christ in Harlan officiating. Casket bearers were Rich Stuhr, Brad Hayner, Dix Scranton, Dan Manhart, and Paul Stuhr. Burial was in the Minden Cemetery in Minden, Iowa. The Burmeister-Johannsen Funeral Home in Harlan was in charge of the arrangements.