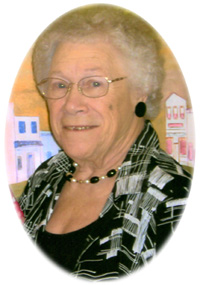 Loretta Mae Buck, the daughter of Hugo and Cloa (Kinser) Fries, was born on September 30, 1930, in rural Walnut, Iowa. She attended school in Shelby, Iowa, and graduated from Shelby High School in 1948. On October 18, 1952, Loretta married Roscoe Harold Buck at the First Presbyterian Church in Shelby. For a brief time while Roscoe served in the Army, Loretta lived in California. The couple returned to Shelby after Roscoe’s discharge. They later moved to Tennant, Iowa. For about six years, Loretta was employed at CDS in Harlan, Iowa.

Loretta enjoyed supporting her children’s sport teams, and often traveled on the bus with the team. She later followed her grandchildren’s sporting events as well. She had a green thumb and cared for various flowers around the home. She loved cooking and canning, and was known for her delicious dill pickles. Loretta liked to pass the time by playing Bingo and cards, and watching basketball on TV. She was always at the fair, supporting various family members as they showed lambs and cattle. Loretta cherished family gatherings and held her family together; she was a great listener.

Loretta M. Buck died on Saturday, June 14, 2008, at the Jennie Edmundson Memorial Hospital in Council Bluffs, Iowa, having reached the age of 77 years, 8 months, and 15 days.